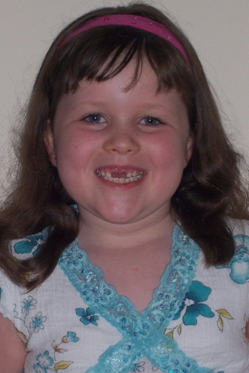 Gemma was a healthy, happy five year old in 2004 attending pre-school 3 days a week and very much looking forward to “big school” the following year.  At work I received a phone call from the preschool teacher saying that Gemma had fallen off a chair and seemed to lie on the ground unresponsive for a few minutes.  She said that it seemed she had had some form of “seizure”. Seizure, a word I would come to know very well over the next two years.  I took her to the GP and he wasn’t all that concerned but suggested we go and see a neurologist “just to put your mind at ease”.  We saw a neurologist at the Children’s Hospital at Westmead and after all the usual neuro checks she suggested that Gemma undergo an EEG.  I remember that EEG very well as the best results are obtained if the child is sleep deprived so here I was at a local restaurant at 10.00pm giving Gemma ice cream to keep her awake then when we arrived home about 11.00pm my husband took her for a walk around the block for an hour!!  The EEG was uneventful as far as we were concerned and the technician said to make an appointment back at the neurologist for the results.

About a month later we went back feeling very confident that there was nothing wrong as there had been no further incidents and life was just going on as usual.  The neurologist informed us that there were “abnormal” wave patterns seen in Gemma’s EEG and that she should start anti-epileptic medication.  I remember being in a bit of a daze and saying “are you telling me Gemma is an epileptic?” and the Dr said yes but if she just takes some medicine she will be fine.  Once again life went on and Gemma started school with no problem whatsoever.  About three months later I again received a phone call from her school teacher saying that Gemma had been playing up on the grass and had just fallen over and lay there pretending not to move.  I said to the teacher that she probably had had another seizure and the teacher said “Oh I forgot all about that I thought she was just playing!” Over the next six months Gemma started experiencing a wide variety of different seizure types.  She had started having drop to the floor tonic clonic seizures, absent seizures where her eyes would start flicking up to the right or where she just zoned out for a couple of minutes. We would go back to the neurologist every time a different seizure type surfaced and her medication would be changed or increased.   With the increase in dose came the behavioural changes and my gorgeous six year old became a complete terror!!

We had numerous visits to the Emergency Department which resulted in admissions to try and get the seizures under control.  We tried infusions of immunoglobulin, the Ketogenic diet and cocktails of epileptic medication but nothing would stop the seizures.

By the September that year Gemma had deteriorated so much that she couldn’t go to school or function normally in any way.  I took her to the Emergency Department once again and said “I am not taking her home until she is better!”  Little did i know that we would come home four months later and without the left side of her brain! During October they monitored her but once again nothing was helping and with the amount of seizures she was having, she was increasingly becoming very weak on the right side, so much so that she could hardly walk and was losing her ability to speak.

We were introduced to Dr Mark Dexter, a neurosurgeon, as the RE diagnosis was being floated around.  He suggested that Gemma undergo a brain biopsy to finally confirm the diagnosis.  This was performed on the 7th November 2006 and two days later RE was confirmed and Dr Dexter told us the only treatment for Gemma was for her to undergo a left hemispherectomy.

We were told that she would walk again albeit with a limp, she would have no peripheral vision on the right side of both eyes and that her major disability would be her right arm and hand.  He was a bit concerned about her language ability following removal of the left hemisphere but hoped that during her illness her language had transferred across to the “healthy” hemisphere.

Often people have asked me how we made the decision to undergo this radical surgery on our child but to be completely honest we simply did not have a choice.  It was either the surgery or there was no future for Gemma.

She underwent a left hemispherectomy on the 14th November 2006. The surgery took 8 hours and Dr Dexter told us that everything had gone very well.  She was moved to Intensive Care for the night and during this time she asked the nurse for a blanket because she was cold!!  Her language had transferred over! What wonderful news and a great relief for us.

By lunchtime the next day she was out of Intensive Care and back to the ward doing so well.  Each day we would see an improvement in Gemma and the physios were keen to get her up and moving as soon as possible.  They started by putting her on a “tilt table” twice a day to help with balance and the sense of being “back on her feet”.  Then it was full steam ahead getting her walking.   She was also undergoing speech therapy and occupational therapy to get her used to a “one handed” world.  She did incredibly well and on the 19th January 2007 she “walked” out of hospital and we had our gorgeous 7 year old back absolutely seizure free.

She started back at school two weeks later and has never looked back.  With the help of the occupational therapists we put strategies into place to make things easier for Gemma.  We would rule a highlighted line down the right hand side of her page so she knew to keep writing until she saw that line.  She was tending to stop writing in the middle of the page. She also had a “sticky mat” on her desk so that her page didn’t move while she was writing.

For the first two years after surgery Gemma seemed to just ignore her right arm and hand but as she is getting older we have noticed that she is using it a lot more to help with holding pages down and carrying things in the crook of her arm.

Gemma started high school in 2013 and while her mother was extremely anxious, she has handled it extremely well, is very organised and extremely conscientious about her work.

Gemma is now a delightful 14 year old who despite her disability just “gets on” with life and faces each challenge head on with an “I can” attitude. 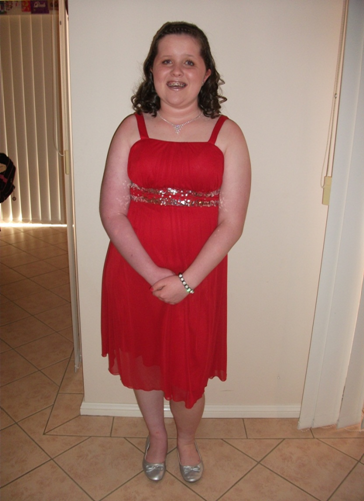