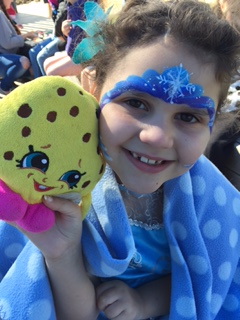 Tammy and Scott King live in a small town called Wynyard in Tasmania with Indiana, who is eight and Jacob (18), Melika (23) and Melika’s baby daughter, Hadley.  Tammy explains their family’s Hemispherectomy journey.

When Indi was just three days old, we were told she had suffered a stroke (we later found out that this occurred sometime in the third trimester) and we really didn’t know what to expect after that. Life just got a whole lot busier with constant medical and therapy appointments and when she was three months old, Indi started to have seizures.

She was diagnosed with simple partial seizures, which were short, sharp seizures and she was having around 30 a day. After trialling several different medications, there was little improvement and at ve months of age, her seizures were coming in clusters and she was diagnosed with infantile spasms, which is a more severe form of epilepsy as it affects the whole brain.

At her worst, Indi was having 300+ seizures a day. She was also diagnosed with left hemiplegic cerebral palsy at the same time so this was a lot of information to take in. Both the seizures and the medication made her very drowsy so she slept a lot and when she was awake, she was seizing almost constantly. The five anti-epileptic medications she was on were not very effective so at the age of eight months, her neurologist suggested that Indi may be a good candidate for radical brain surgery where they would disconnect the right hemisphere of her brain.

We were told that there was a small window of opportunity to do the surgery before the seizures did any further damage to the healthy side of her brain (the left side). For us, it wasn’t really something we had time to think about. If we didn’t go ahead with the surgery then, developmentally she would’ve stayed a four-month-old for the rest of her life.

Eventually, the seizures would’ve killed her. So, we made the bold decision to allow the surgery to go ahead.

Indi was only 10 months old and physically handing her over to the surgical team was gut wrenching. I was in a flood of tears and wondered if we were making the right decision. What if she didn’t make it through the surgery? It was the longest nine hours of our lives and seeing her afterwards is something I will never forget. She was hooked up to a lot of different machines with IV lines coming out of her little body. Recovery was long and slow but she was making progress and eventually was weaned off all medications.

Fast forward to now and Indi can run, jump, talk (a little too much!) and is attending both mainstream and special education schools. She was diagnosed with autism when she was four and has also been diagnosed with left hemianopia (loss of the left field of vision in each eye), ototoxicity (loss of the high frequency part of her hearing), adjustment disorder and mild scoliosis.

Indi is learning new skills all the time and although she has to work extra hard at most things, she gets there in the end and we celebrate all of her achievements! We would definitely do the surgery again as she now has a much better quality of life. 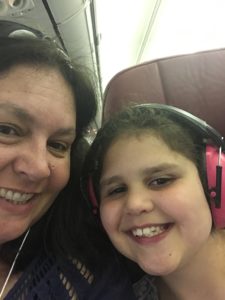 I have spoken and met with other families whose children are yet to have the surgery and I have given them practical advice and offered moral support. When Indi had her surgery, I felt very isolated as I wasn’t involved with a support group and wasn’t aware of anyone else who had gone through this surgery. Now, we have the ongoing support from the Hemispherectomy Foundation of Australia and it’s great to know we can share stories and ask questions when we have concerns. It’s nice to know we are all here to support each other through this journey.