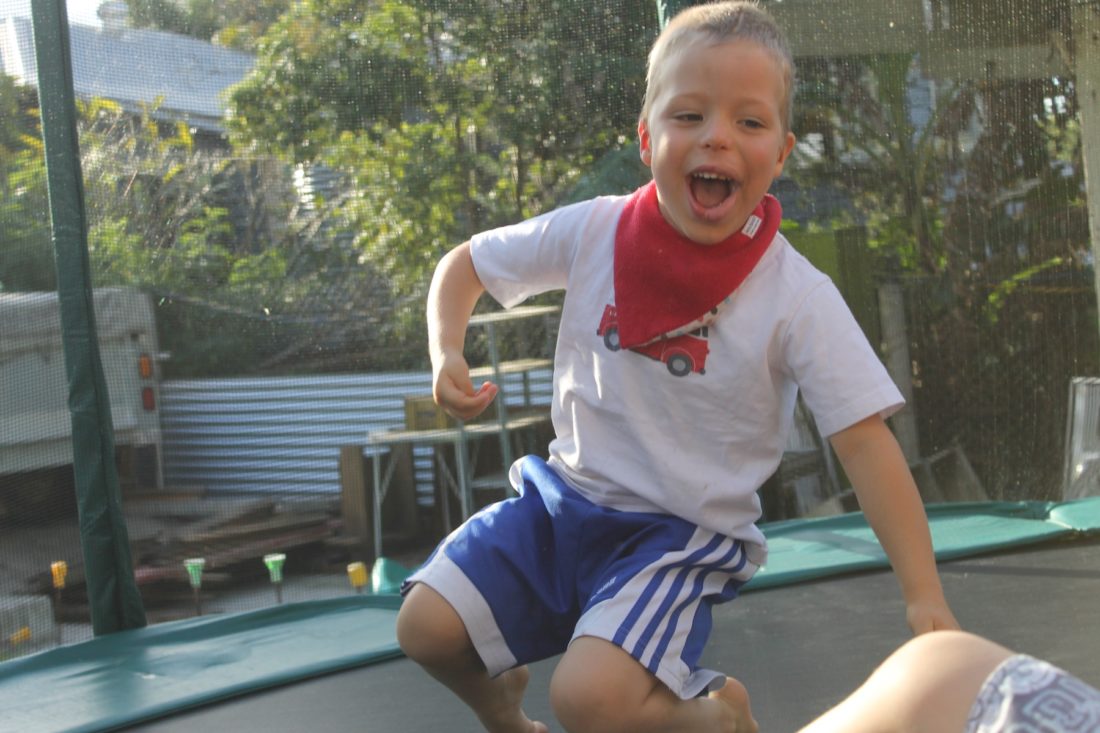 Max is our gorgeous little boy, now 4, and together with his twin brother Flynn terrorises the neighbourhood as only little boys can, where we live in Brisbane, Qld. Max had a left hemispherectomy in March 2010 when he was 10 months old due to the condition he was born with: Hemimegalencephaly (HME).

3 days before my twins were born we received the traumatic news that both boys had something wrong with their brains. We were told that Max’s condition was Hemimegalencephaly, that this was ‘bad news’, we could be heartened by the fact that there was an operation that could help, but ‘not to worry about that in the meantime’.  I was alone after receiving the news, and in a terrible moment discovered I knew why hospital windows don’t open.

Max commenced anti- epileptic medication at 3 days old, increasing the cocktail to 8 different medicines at once as the seizures just ramped up. We became frequent flyers at the Royal Childrens Hospital emergency department, as the emergency medicine we had to give him when his seizures wouldn’t stop had the effect of reducing his drive to breathe each time. So we had to go to emergency for monitoring to make sure his breathing didn’t stop. By Christmas 2009 we would be in emergency around every second day. After two trips to hospital on the same night, with the same ambulance crew on shift, it started to become obvious that Max was not going to have any chance of life without surgery. So the count down began, a trade off between Max gaining weight to be over 10kg, when the survival statistics post surgery became more positive, and not letting too much of his brain be damaged while we waited.

For us the choice to have surgery was very simple. It was the choice where there really was no choice atall.  About 12 hours after leaving Max in the safe hands of Dr Dexter on the 29th March 2010, he was able to tell us that Max had thankfully pulled through …….. and everything was going OK. In the weeks following surgery, we gradually began to accept that Max truly was going to be OK.

There was a little wobble a few months after the hemispherectomy when Max developed hydrocephalus- likely as a result of that first surgery. Dr Dexter dealt with that by putting in a VP shunt. He told us that if hemispherectomy surgery was 10/10 in terms of risk and complication, then this shunt insertion surgery was 1/10. I remember thinking how did I ever get myself into a situation where I was starting to think that neurosurgery was just simple….. but it was made to look simple, and Max really started to thrive after the pressure on his brain was relieved.

Life has since become a merry go round of therapy and medical appointments, all designed to get the maximum input we can while Max is still so young. From having constant electrical activity in his brain and seizures all day, Max has no had no seizures since the day of surgery.

One Doctor said to us to think of the hemispherectomy of not so much of ‘losing half your brain’, but ‘ getting rid of the toxic half of your brain’. It’s not as if the half that was removed was worth having. And that is how it is appeared, with Max now able to learn and thrive. Still so little, the main thing we noticed immediately was brighter eyes and alertness. We just waited every day to see what would happen next, as no one would ever tell us what to expect or how much we could ever hope for in terms of childhood development.

Max is now 4 years and 2 months old. He is the most compelling, engaging and life-at-full-speed little boy you will ever meet. This year he learnt to walk without his walker and so can now get around unassisted, just with little orthotics on both legs. Once he got the walking thing down pat, now he has started talking, literally gaining words daily now. He is very determined to do what he wants to do, and this never say die attitude will help him, considering the challenges he faces. He clearly understands a lot more than what you might think, as talking is not easy for Max. He loves cuddles, tickles, singing, the trampoline, music and anything involving people. Max is obviously delayed in his physical, sensory, emotional and intellectual development.

We will never know what sort of boy Max would have been had he never had HME or his neurosurgery. What we do know is that the surgery gave us a chance of life, and allowed our beautiful, affectionate and outrageously extroverted boy a chance to grow into his own personality without the debilitating effects of multiple daily seizures. Life is hard for him in all ways, and for us too sometimes, but if you were to meet Max you would understand that he is one of the truly happiest boys you will come across.  Find out more about Max’s story in his video.