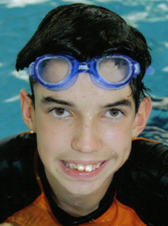 Rory is a bright and cheerful 17 year old boy who lives in Camden NSW with his family. He is an only child. Rory had a left anatomical hemi in February 2001 to cure Rasmussen’s Encephalitis and he is now doing remarkably well.

At age 4 and a half, in June 2000, Rory had an out of the blue grand mal seizure and by December he was having hundreds of seizures a day. He was a healthy child when it began.  Despite many drug trials, Rory declined rapidly, losing use of his right hand and arm, lots of his speech and imagination. He became an angry, sick, and very unhappy little boy in a shocking downward spiral. No longer able to ride his 2 wheeler bike, or engage in his vivid ‘story games’ of his own creation, Rory became rigidly focussed on a few activities and he used stock phrases to communicate. He wore a helmet everywhere to minimise damage in falls. We pushed him in a stroller and by Xmas he was unable to walk without a mobility aid. Our fun loving, talented child had disappeared and life became very bleak.

Rory underwent a left anatomic hemi in February 2001. By then, we had exhausted all alternatives. The choice, for us, came down to creating a deficit but regaining a life, or living in a hospital seizing 200 plus times a day, 24/7. We chose surgery after agonizing weeks of debate. Dr Dexter took 9 hours to do the unthinkable to our beloved child. It was the second time he had performed the surgery.

In the weeks following surgery, Rory slowly returned to us. He spoke in broken sentences, he re-learned how to walk and use the toilet. He re-learned his colours. He was in a daze for 2 weeks as his body and brain reeled from the insult. He watched Spongebob endlessly, just staring at the screen. Then one day, he smiled again. Emotions returned. Slowly, the same old Rory returned.

In 2002, Rory started school. He learned his alphabet, he learned to read. Some things happened at the same pace as his peers, others more quickly or more slowly. Over the next few years he learnt to swim and run fast. His fabulous vocabulary returned. He woke up one morning in kinder and asked, “Is a pig symmetrical?” He was back. By 2009 when he began high school, Rory functioned much like his friends. He went on camps, he played hockey, he snorkelled, he played footy and cricket in the backyard. He found it very hard to interact in a group, he hated loud noises, he found decoding new words difficult and his comprehension skills were low average. And yet, he was dux of his Year 7 class in a mainstream school.

Rory worked hard at school. He has maintained his amazing efforts and is now entering Year 12 which he will complete over 2 years instead of one. There are areas of cognitive weakness, even disability. And there are areas of unexpected ability. He is school captain for 2014. He has just returned from a 2 week home stay with a family he had never met in Japan. He handled all his luggage and money himself. It was hard, he made mistakes,  but he did it. He spoke some Japanese. He is thinking about a health services career. He goes to the gym to improve his core strength. He plays the piano with one hand. He is a PS3 and X Box champion.

Rory is hopeless at directions, geometry and mapping. He does not understand metaphors. He cannot research independently. He can, however, find other ways to do things. He can see a future for himself. He has learned to live with who he is. He is prone to much of the same teenage issues as his friends.

So that’s Rory. He is the same person he was at age 4, with some alterations to his abilities. His hemi has allowed him, and us, to get on with our lives. Different lives, perhaps, and at times, deeply challenging, discouraging and painful lives. Yes, the impact has been huge, but happily, life goes on for Rory, seizure free.