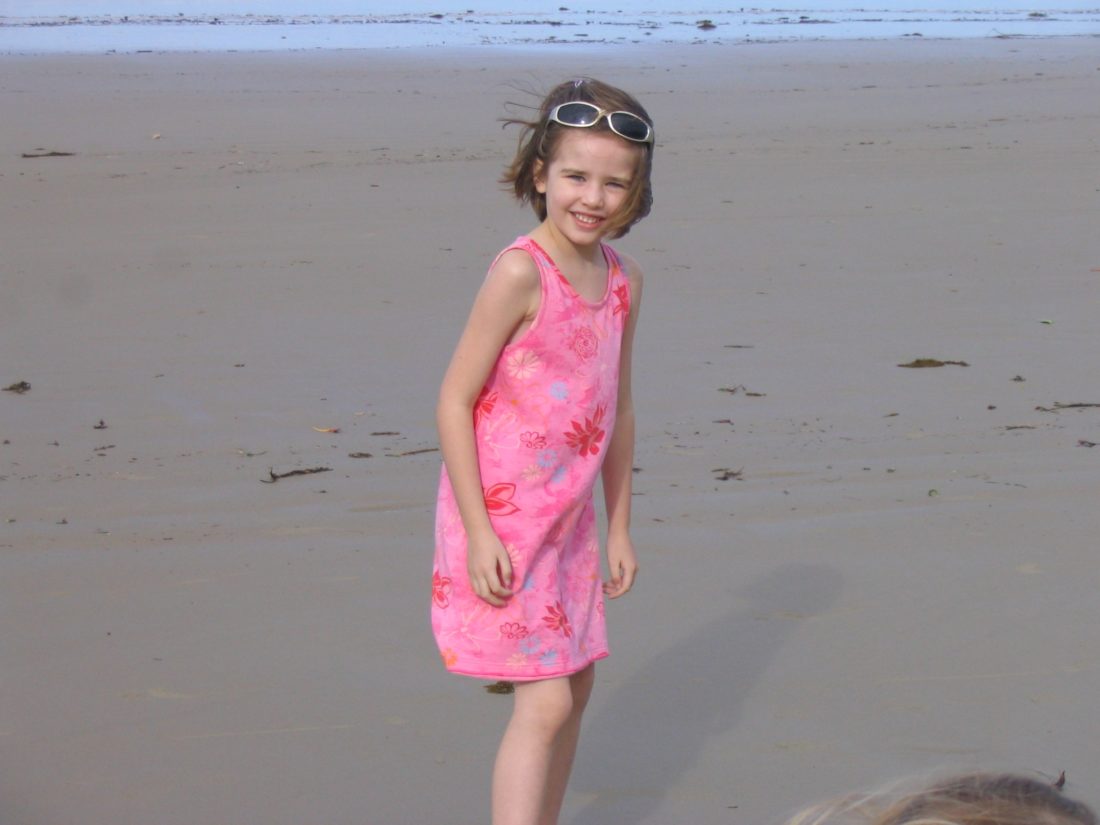 It was a beach holiday in 2005 when life for our family changed irrevocably.  We had left Melbourne for Byron Bay with our two young daughters, Freya aged six and Ella aged three.  Both girls were in, and always had been in great health. Freya had just started school and celebrated her sixth birthday.  She was a happy, even-tempered and beautiful little girl.

We flew into Brisbane and drove to Bryon Bay.  During the car trip Freya vomited several times which we attributed to a virus or car sickness.  Within a day or so of arriving in Byron Bay she began to have episodes where the left side of her face twitched and she drooled excessively.  These were happening about ten times per day and causing her much distress.  Two different GPs  we consulted during the holiday assured us that this was no more than a viral tic.  However, the third GP we saw just before heading home performed what I know now to be a series of neurological tests and recommended that we take her the emergency department when we returned to Melbourne.

By the time we saw the neurologist in the emergency department of the Royal Children’s Hospital in Melbourne, the twitches and drooling where happening every five or ten minutes.  It took only a quick examination by the neurologist for him to determine these episodes were epileptic seizures.  Freya was admitted and an MRI and EEG confirmed the epileptic activity was coming from deep inside the right hemisphere, in the insula cortex – an unusual area for epilepsy that attracted much interest from the neurology team.

So we had a daughter with epilepsy. This came as a shock, but we were not overly upset and we were advised that most childhood epilepsies resolve by themselves before adulthood.   My husband remembered his father had epilepsy in his adult years – that is where it must be from we surmised – her genes on the paternal side.   She responded well to the medication, the seizures completely stopped and life went back to normal.

Unfortunately, normal didn’t last.  Six months from her first seizure another seizure type presented and more medication was prescribed.  This became the pattern for the next three years – a new seizure type and more medication.  During these years, she had periods where she only had a seizure every few days to times where she was hospitalized with seizures every few minutes.  During these years she always experienced more than one type of seizure, meaning we were continually having to inform the school of Freya’s latest seizures and how to respond to each type.

After three years of this intractable epilepsy and increasing weakness in left leg, her MRIs were now showing progressive brain atrophy or shrinkage in the right hemisphere of her brain and the doctors were confident enough to confirm the diagnosis of Rasmussen’s Encephalitis (RE).

She was then placed on Intravenous Immuglobulin (IVIG) infusions every few weeks to slow the progression of the disease.  After much lobbying from ourselves, the hospital agreed to give Freya access to a drug that was the subject of a promising clinical trial for the treatment of RE in the US.  As a response to this drug could take up to six months we had to wait while the seizures were escalating in frequency and severity, taking a huge toll on her quality of life.   The six months dragged by; she had had no response to the drug, she was tired, she was sad and she was struggling at school.  She was limping badly as her left side became weaker.  Often the left leg would just give out completely and she would fall heavily.  For us the time for surgery had come.

Freya had a right hemispherectomy in August 2010 at age 11.  The surgery was performed by Wirginia Maixner, the same neurosurgeon who months earlier had successfully separated the brains of co-joined twins.  We knew Freya was in good hands.  Wirginia’s technique was to disconnect rather than remove Freya’s right hemisphere, meaning less blood loss and no need for a draining shunt.   When we met with her a month or so before the surgery, she was extremely confident that surgery was the right option for Freya and that she would have a good outcome.  At this time, it was just the reassurance we needed.

The surgery to disconnect Freya’s right hemisphere from the rest of the brain took 11 hours.  Wirginia declared the hemispherectomy (technically a hemispherotomy as the hemisphere wasn’t removed) a “text book” case.

The weeks and months after the surgery were difficult – not only were there the physical challenges of having to relearn to walk and function without the use of her left arm and hand to contend with, there were also significant emotional changes.  Freya was depressed and anxious; she showed little enjoyment in anything and could only concentrate on activities for a very short amount of time.  Her brain as Wirginia described it was “scrambled”.

After intensive inpatient rehabilitation we were discharged from hospital 100 days after her surgery and her rehabilitation therapy continued as an outpatient.  Over the coming months Freya slowly improved.  Her dark mood lifted, her anxiety eased and her personality, including her sharp, dry sense of humour returned.  Our little girl was back – and seizure free.  She returned to school, she slowly regained pleasure in life, and the flat, emotionless demeanor went.

Today Freya is a delightful 14 year old girl. She hasn’t experienced another seizure since the one she had while being anesthetised for surgery prior to the hemispherectomy.   At an age that can be difficult for any girl, she is positive, enthusiastic, conscientious and kind.  She attends a regular secondary school, has a great circle of caring friends and copes with the standard curriculum with some support.  She finds maths and other spatial concepts difficult, but then again so do I so maybe this is more due to genetics than from having no functioning right hemisphere.

When I look at photographs or video from before Freya had Rasmussen’s Encephalitis it is difficult not to mourn the losses s
he has experienced and the years of her childhood that were marred by seizures, the effects of medication and hospital admissions.  She will have a more difficult life than the one she was born into.  However, seeing her now, living a full and happy life reminds me just how incredible a child’s brain is.  Still, removing half a brain is not something that should have to be done in the 21st century.  It is a brutal and blunt instrument to cure a disease like RE.  With more research and better medical treatments for RE I hope stories like Freya’s are not being told in another 50 years.